[A 1-on-1 multiplayer roguelike boardgame] The gorgon queen has covertly replaced the queen of the kingdom, and a lone warrior, Nod, has discovered this usurper. When he tried to expose her, he found himself stripped of his rank and his wife taken from him, turned into stone, and hidden deep in a mazelike dungeon. Take control of Nod, the intrepid warrior, and make use of a variety of potions and powerup pickups to fend off the beast and reach your love while your friend plays as the monster and hunts you with the guardian of the dungeon, the fearsome Illek! The Illek is a powerful dragon that becomes stronger the deeper into the dungeon you go. Don't let Nod reach his wife!

This is a bit complex, but you’ll pick it up quickly if you try it out. This is a two-player-only board game. One player controls Nod, while the other controls the Illek. Nod’s goal is to either kill the Illek or reach his statue-ified wife deep in the dungeon. The Illek’s goal is to stop Nod from doing either of those things by killing him. The game starts with Nod in the top-left space and the Illek in the bottom-right space. Turns proceed sequentially for each player. The actions available during a turn include digging, drinking a potion, and moving up, down, left, or right.

Play how you like. Try to get as deep into the dungeon as you can, perhaps.

Suggested win conditions: Nod either kills the Illek or reaches his wife. Players take turns playing as Nod until one of them achieves the win condition.

Restart the game with R

If using a mobile device, touch controls will appear. Tap anywhere on screen and hold to reset.

HP: This represents the character’s remaining life. When this reaches zero, the character dies and the game is over.

Strength: This controls whether or not an attack overcomes the opponent’s block or not, NOT how much damage is done. The higher the strength, the more likely the attack is to hurt the opponent.

Defense: This controls whether or not the defender can successfully block an attack. The higher the value, the stronger the attack that can be blocked.

Speed: This controls who makes the first strike in combat. This can play a large role in the outcome of close matches. The player with the higher speed stat attacks first.

Immunity/Hunger: Nod is slowly being dying from the toxic are filling the dungeon. He can stave this off by drinking his potions, and the Illek can speed up the toxin’s effects by using the spore cloud. The Illek needs to eat, and survives primarily on the mushrooms that grow in the dungeon naturally. These mushrooms are what release the toxins into the air, and the Illek’s diet of them is what lends it its venomous properties. The Illek can also drink potions to help with hunger, though this is less effective than eating mushrooms. The counters decrease each turn, and when immunity/hunger gets to zero, a HP is lost by that player and the counter resets.

Nod raises and lowers his stats through the collection and use of items, while the Illek becomes stronger the deeper into the dungeon the players go.

PIECES THAT CAN BE SEEN ON THE GAMEBOARD:

. Nod’s wife, Ydal. Nod wins if he safely reaches her.

. Stairs, which lead deeper into the dungeon. Either Nod or the Illek can touch this to advance.

The Illek can eat mushrooms in the dungeon to use its special abilities.

Yellow mushroom: the acidic mushroom allows the Illek to fire equipment-destroying acid spit attacks in battle phase. It does nothing on board phase, but if you can catch Nod in a battle with this mushroom still in your stomach, he’ll need to run or lose all his stats! Acid spit decreases Nod’s statistics, even when blocked.

Purple mushroom: Allows the Illek to use spore cloud with the G key. This creates a cloud of poisonous spores that decrease Nod’s immunity on contact, though he can dispel the cloud by digging from the space next to the cloud.

Blue mushroom: makes the Illek’s next step a large leap! He can’t take off if a wall is in the space next to him in that direction, but he can land on walls and/or jump off the side of the board to loop around to the other side!

The mushroom abilities wear off after a few floors.

Nod can drink a potion by pressing L.

Heartsip: gives Nod 1 HP when drank, 50/50 chance of doing the same for the Illek if the beast gets the potion, instead

Yellowbelly: makes Nod invisible, wears off when you change floors. If you are holding this potion in battle, Nod’s “flee” command will always be successful, and he will get the first move.

Red Ram: rage riots throughout Nod’s body, and his strength flares up before sharply falling. How is this used effectively? Hold this when entering battle phase.

Blue Bull: bravery braces Nod’s being, and his defense flares up before sharply falling. How is this used effectively? Hold this when entering battle phase.

Warp Worm: a bug with teleportation abilities swirls in a strange sustaining liquid. Swallowing it shifts Nod to somewhere else on the board.

Rot: potions are volatile and spoil easily; the effects of this liquid are unpredictable.

There are old bows and arrows that can be found in the dungeon. Nod can pick up a bow/arrow by touching it, and the Illek crushes them underfoot by touching them. If Nod has both an arrow and a bow at the same time, he can fire a poison-tipped arrow that will travel towards the Illek. If it hits a wall it will be destroyed, but it can also destroy a mushroom on contact. If the arrow hits the Illek, the Illek’s hunger meter will be partially depleted.

Nod’s piece is seen in the top-left, and the Illek’s is in the bottom-right. The bricks show where it is possible for walls to appear in the dungeon, though there is a limit to how many there can be at once.

This is an example of a game screen during play. The “WAITING ON…” texts indicate which players need to take action to progress the turn, and the characters’ stats can be seen near the bottom. The current floor number will also be displayed near the bottom of the screen (not shown in the above image).

The combat screen can be seen above. The player’s stats can be seen, as well as the controls to attack or flee. Nod uses enter and L, while the Illek uses space and F. 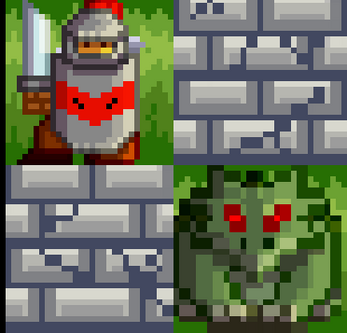